When I hit 20, I was a couple of months into my junior year at college, where radio was my life. When I wasn’t in class, or working part-time to earn enough money to pay tuition and buy lunch at the Campus Sub Shop, you’d find me at the Seton Hall University radio station, WSOU-FM. I loved being in front of a microphone, and did everything from reading news, to anchoring our election-night coverage, to spinning records on both an early-morning pop music “wake up” show called Bacon ‘n’ Eggs and our late-night “progressive rock” offering called Nightrock.

What I really loved, however, was writing and producing; being able to write a script, direct actors, and edit a finished piece of audio that came out of the speakers sounding like it originally did when I “heard it” in my head was a gas. In fact, my first professional award came when I was 20, for a series of promotional announcements I wrote, directed and produced for Nightrock. I’ve included one of those spots, first aired in 1976, here. Just click on the audio button below to play it. 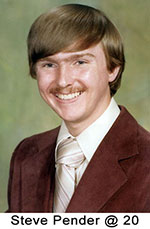 I also co-wrote and produced a comedy show called Harrold. It was a sketch comedy show, inspired mainly by the National Lampoon Radio Hour. (Not old enough to remember the National Lampoon Radio Hour? Google it.) We packed our half-hour with all sorts of bits, from fake commercials to irreverent skits of all kinds to song parodies. It was lots of fun – but, as I came to find out, also a ton of work.

In the mid-1970s, there was no such thing as digital audio recording and editing. When I wanted to make an edit in a recording, I physically sliced into the tape with a razor blade, removed what needed to go, cut the tape again, and then stuck the two ends of the tape together with splicing tape. And since multi-track recorders hadn’t yet made their appearance at WSOU, adding music and sound effects was also a challenge. All in all, it was a time-consuming process. Even though I got to be very fast with a blade, I spent many hours hunched over tape decks in the station’s tiny production studio, doing my best to finish each week’s show before airtime.

Once I nearly didn’t make it. 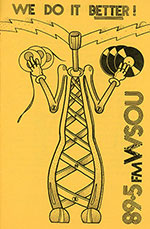 Thanks to a number of factors (school work, regular work, procrastination), Harrold’s Christmas 1976 installment was only half done by the time the show was due to air. I was in a panic. I handed the reel containing the first fifteen minutes to the engineer and told him that, if I wasn’t out with the second half by the time the first half ended, he should just keep playing public service announcements to fill the time.

I hustled back to the production studio, grabbed my blade and editing block and bent feverishly to the task at hand. I remember how surreal it felt, listening to the show playing on-air while I was still editing it. My fingers flew faster then ever before, and by the time I rushed into the control room with the second reel, I think only four or five PSAs had played. Luckily, all the splicing tape held and the rest of the show ran without a hitch. I breathed a sigh of relief and swore that I’d never, ever, come that close to missing a deadline again.

Would you like to read some other Me@20 memories? Check out these blog posts:

Include your answers to the Me@20 Questionnaire in your post:

About Me@20 Day:
Me@20 Day celebrates personal history and the 20th anniversary of the Association of Personal Historians on May 20th 2015. APH supports its members in recording, preserving and sharing life stories of people, families, communities and organizations around the world.