Whenever Spring rolls around, I always think of this silly poem by the famous poet, Anonymous:

Spring is sprung, the grass is riz
I wonder where the boidies is
They say the boid is on the wing
But that’s absoid, the wing is on the boid!

At any rate, I hope as temperatures warm, more vaccinations take place, and the promise of a return to normal lives moves closer to reality, that your spirits take wing as well. I know I’m feeling optimistic now that I’ve been vaccinated.

In keeping with the spirit of April 1, this issue adds some foolishness to the mix – see if you can spot it!

I hope you enjoy this issue of the Family Legacy Video® e-Newsletter. Please e-mail me at steve@familylegacyvideo.com or phone toll-free (888.662.1294) with any questions or comments you have.

Part 3 of a four-part discussion about all aspects of legacy videos debuts this month on the Legacy Video Lounge Podcast. During the next two installments of the Talkin’ Legacy Videos series, Steve Pender and writer Elena Acoba focus in on the legacy video production process. If you’d like to know what to expect when you hire Family Legacy Video® to produce a personal legacy video for you and your family, you’ll want to listen to these next two podcasts.

Researchers at the Felton-upon-Swoop College of Medicine and Dentistry in Wales recently completed a study proving beyond a doubt that sharing family stories leads to improved gum health.

Dr. Hughes and his team conducted their research in local pubs in and around the college campus. Pub-going volunteers were given the opportunity to join discussion groups, each dedicated to one of three topics: family history, politics, and sports. Each participant’s oral health was evaluated at the beginning and end of every session.

According to Dr. Hughes, “Time and time again, the group sharing family stories evidenced increased blood flow to the gums, improved muscle tone in the tongue and jaws, as well as a decrease in harmful oral bacteria.”

Pressed to explain the results, the doctor could only speculate. “Generally,” said Hughes. “The family history groups were upbeat and animated. This resulted in increased blood flow to the oral musculature. And thanks to deep and regular breathing while speaking and listening, that blood was highly oxygenated, and spittle was kept to a minimum. The other groups tended to down a few too many pints and get a fair number of salty snack bits stuck between their teeth. Plus, there were a lot of rows when debates became heated, as they usually do when discussing sports and politics. This behavior generally resulted in punches thrown, which produced extreme oral trauma in many cases.”

Book early to get to the head of the legacy video line! 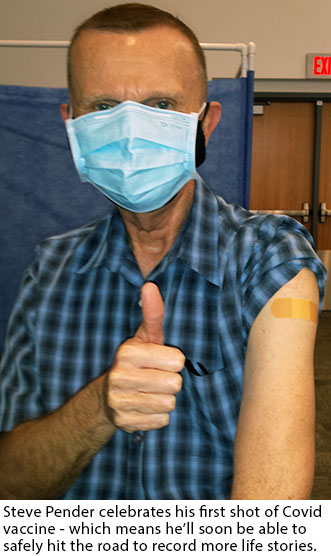 The U.S. economy is poised to take flight once the pandemic lifts and relief money hits American’s bank accounts. At least that’s what economists and financial prognosticators are predicting.

Part of what will drive consumer spending is pent-up demand for goods and services that were unavailable or hard-to-get during our various Covid lockdowns – and those services just may include legacy videos.

The number of email and phone inquiries about Family Legacy Video’s offerings has been pretty high during the pandemic – a sign that many folks have realized that life is precious and fleeting – and that personal life stories need to be preserved, celebrated, and shared before it’s too late. That means there’s every possibility that those inquiries will morph into bookings when the pandemic cloud lifts in the near future.

So – if you’re thinking of embarking on a legacy video project in 2021, don’t wait to give Family Legacy Video® a call. You don’t want to get caught at the back of the line!