Welcome to the June issue!

A heavy video editing schedule (finishing up a four-part video biography over four hours long) forced a delay in this month’s e-Newsletter. But – I hope it was worth the wait! This month we’ll talk about special effects and answer a reader’s question. 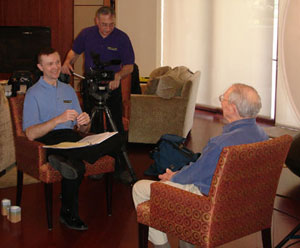 Special effects have been around since almost the dawn of motion pictures. They’re used to make superheros fly, tidal waves wipe out cities and spaceships zip through space. Some of them are obvious, but many are not. In fact, some of the most effective special effects are those you’re not even aware you’re watching. As an example, take a look at a sequence put together by the folks who create effects for the HBO series “Boardwalk Empire.” What’s truly impressive is how seamless the effects are. Most viewers would probably be surprised at how much of what they’re seeing on screen is digitally created or enhanced.

To be truly successful, special effects should support a story, not distract from it; that’s true of big-budget major studio productions as well as legacy videos. And while video biography producers like Family Legacy Video, Inc. don’t usually require, or have budgets for, the kinds of special effects used by the “big dogs,” today’s technology has put a lot of effects capability in the hands of smaller producers. The temptation for some is to use effects just because they can.

A case in point is green screen.

You’re probably familiar with green (or blue) screen effects, where an actor (or your local weatherperson) is shot against a green background. The green is electronically removed and replaced with another image (a weather map, for example). Some video biographers even use this technique, recording their storytellers’ interviews using green screen. This is a stylistic choice, to be sure, so I won’t get up on a soapbox and declare that video biographers should never use the technique. I will say, however, that I’ve never seen green screen used truly effectively in a video biography; I also believe the effect has definite drawbacks. Here they are:

2. Adding work in post. Before you opt to shoot a green screen interview, make sure you have plenty of visuals available. That’s because you’re going to need to have something behind the storyteller during every frame of the video, which means the video biography becomes one long effects sequence. Do you really need to create all that extra work?

3. Taking the home out of the equation. Showing storytellers in their personal home or business environments, surrounded by items important to them, adds immeasurably to a legacy video because those environments, and the personal items they include, are part of the story. That’s why Family Legacy Video takes pains to show storytellers in their home and business settings instead of removing them via green screen.

There are probably video biographers who would disagree and who sell the “wow” factor of green screens to their legacy video clients. But does this particular kind of “wow” do a service or a disservice to the client? In my opinion, it’s the latter.

Ask Steve – This month: Other audiences for video biographies.

Q: Dear Steve,
A reminder that I am a former student of your on-line class about family videos. With your help I have created an exceptional video memoir. Lets just say this a fine piece of family video making. Where, oh where does such a magnum opus belong? With the family and community, of course. In universities? Film contests?

A: Hi, Fred.
Congratulations on completing your project. I’ve just finished up a rather extensive project myself that will be over four hours in length, divided into 4 separate DVDs & Blu-rays. It’s been a year in production, with extensive shooting and research involved.

As to where these productions belong – certainly with the family. If the client is open to it, local libraries and historical societies might be interested in archiving the video. It goes without saying that you need client approval before you distribute the video outside the family. I do enter some of my video biographies in video festivals. When I win (like I did just recently) it’s good for PR – another excuse to crow about my company to the local press and also on social media.