Welcome to the October issue!

I just flew in from Ireland and are my arms tired (cue rimshot)! I’ve finally recovered from jet-lag, and I’m taking the opportunity this month to share a story of family rediscovery I experienced on my trip.

So there we were, my wife and I, standing on the main street of Ballyclough, Ireland, wondering what to do next. I first heard about the town from my grandmother. According to her, my great great grandfather, Michael Morrissey, had been a blacksmith in the town. In the mid-1800s, he left his family behind to begin a new life in the U.S., settling in New York City and eventually marrying a young lady named Ellen O’Keefe – who, it turned out, came from a town not too far from Michael’s named Donnerail. Funny thing – although they grew up in neighboring villages, they only met after they both had found their ways to Manhattan. I always thought it would be fun to see the town someday. And this year, when Halina and I took our first trip to Ireland, I got the chance.

Standing on sidewalk, looking down at a street featuring neat row homes, a pub, a grocer and a church, I felt like the dog that finally caught the car he’d been chasing for years: What do I do with it? Needing to mail a postcard, Hal and I strolled into the small grocery store, which also doubled as the village post office. Striking up a conversation with the clerk, I mentioned the Morrissey blacksmith shop and asked if she knew anything about it. She said she vaguely remembered the shop from her childhood days, but if I wanted to find out more, I could ask a fellow named Joe Morrissey, who lived a short walk away. Figuring we had nothing to lose, we set out to see whether Joe would speak to us.

In just a few minutes we were standing at the door of a neat little cottage, nestled amidst green lawns (on which cows were grazing contentedly) and a multitude flowers. I rang the doorbell and was greeted by a pleasant, grandmotherly lady. I explained who we were and then mentioned the name Morrissey. At that, her eyes lit up and she called to her husband, “Joe, c’mon out here!” We said our hellos and were quickly ushered into the living room. 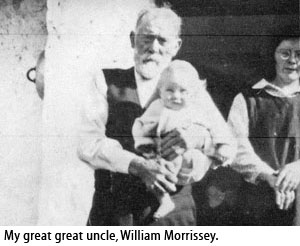 Long story short, as his wife Philomena served us tea and cookies, I learned that 84-year-old Joe Morrissey was my second cousin, twice removed. His grandfather, William, was brother to my great great grandfather Michael, making him my great great uncle. Both he and my great great grandfather had run the blacksmith shop in town. (The shop no longer exists, but we we did find out where it had stood.) Joe and Phil have children and grandchildren, meaning I now know I have second cousins three and four times removed. Leaving their home (the same home in which my great great uncle once lived) I was walking on air. I came expecting only to see the town and then move on. I never expected to find living relations! 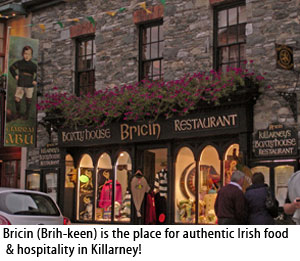 Later that evening, Halina and I went to an Irish restaurant in Killarney named Bricin (Brih-keen). While waiting for a table, we told our story to our host, a very pleasant fellow named Johnny McGuire. A few minutes after seating us, Johnny reappeared with two glasses and a bottle. “Will you take a drink?” he asked. “Of course!” we replied. He poured us each a celebratory shot of Powers Irish Whiskey while telling us it was the brand the locals drank – and reminding us to sip it. What a sweet drink it was.

We enjoyed a fabulous meal and, as we were leaving, Johnny said he hoped we retained the family connection we’d made. He also welcomed us home.

My heart brimmed over when he said that. Because, in a sense, a part of me had come home. It was day I’ll never forget – and that I’ll recount someday in my own video biography.