Welcome to the May issue!

It looks like radio, both AM and FM, is the theme this month, with an announcement of a future radio appearance by yours truly and some reflections on my radio past and how it relates to video biography.

Tuning in to some great college radio memories.

On April 14, 1948, WSOU-FM, the radio service of Seton Hall College (now Seton Hall University), signed on the air with its inaugural broadcast, hosted by none other than Ted Husing, a very popular broadcaster at the time. A little less than twenty-six years later, I walked through the station door as a freshman. During the four years I attended Seton Hall, I practically lived at the station. No mere “campus carrier” heard only on school property, WSOU’s two-thousand watts carried the station’s programs across four states. Producing those programs fell to the student staff. As one of those staffers I enjoyed four years of fun, friendship, excitement and unbridled creativity. Even though my professional career after graduation veered away from radio and into video, my love of scriptwriting, production, performing and storytelling took root during my time at ‘SOU. And so, when I received my invitation to the celebration of the station’s 65th anniversary, I decided to make a pilgrimage from Arizona to New Jersey and join in the fun.

I had a blast.

Even though the banquet room was packed with over two-hundred folks, it didn’t take long to single out the fellow alumni with whom I’d spent many hours on and off-air. We had so much fun reminiscing and catching-up that the wait staff finally had to shoo us from the room after the banquet finished so they could clean up and go home. That didn’t end our evening, though; about a half-dozen of us shot the breeze in the lobby for another two hours. I left with great feelings: appreciation for how much my time at WSOU meant to me and joy at being able to rekindle friendships begun thirty-five years ago.

I also left with a couple of “take aways” that confirmed important aspects of my video biography work. 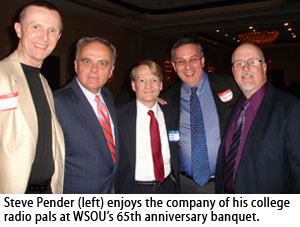 First, as I looked around the room at the people who were and are the station’s lifeblood, I realized that we are a family of sorts, comprised of many generations. Each WSOU generation, however, lasts only about four years, the length of time most of us spent at Seton Hall. Without ongoing efforts to preserve, celebrate and share the history of the station, most of us would have no idea what went on there before we arrived and after we departed. Luckily, thanks to the efforts of some dedicated former staffers, that history, in both image and sound, survives and serves to let me know about the station’s heritage and how I fit into it’s story. Likewise, individuals and families that preserve their life stories and values do current and future generations a great service, because all it takes is a generation to lose the precious stories that make up a family’s history and identity.

Second, the great conversations I enjoyed spurred many memories, memories that had lain dormant for years. I was amazed at the stories that bubbled up as we traded memories and asked each other questions to help fill the gaps in our recollections. The experience was invigorating and fun and reinforced for me the value of life review for stimulating recall. I’ve seen this time and again with my legacy video clients, but experiencing it myself was a valuable reminder of how effective this kind of reminiscing is. In fact, I’m already looking forward the WSOU’s 70th anniversary!